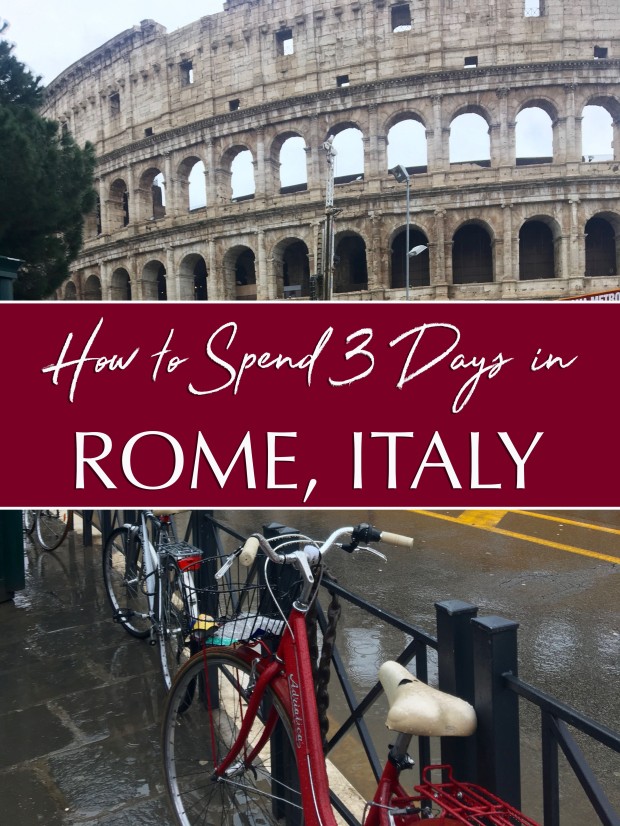 Caio! I was so excited to travel to Italy. This beautiful country seems to be on everyone’s travel list, and after visiting I see why. Between the history, food and culture there is something for everyone. Busy cities, the peaceful countryside and gorgeous islands draw in travelers of every kind. If you’re planning a trip to Rome, here is your guide for three days in this magnificent city.

When you arrive in Rome, if you fly into the Leonardo da Vinci International Airport, known as Fiumicino Airport, hop onto the Leonardo Express train for €14 and it will take you nonstop to Termini. This is the main train station in Rome and from here you can ride the metro where you need to go or hail a taxi to your hotel.

Travel Tip: The best advice I can give you is to find a hotel close to Termini train station. It’s only €1,50 for a metro ride anywhere in the city, so it’s really cheap to get around! If you’re planning to travel by train to anywhere else in Italy, it’s convenient to be able to walk to Termini.

I stayed in Hotel Igea, a simple and affordable hotel just two blocks from Termini. Once we set up shop, it was time to hit the town. Another option is to look for AirBNB rooms near Termini. 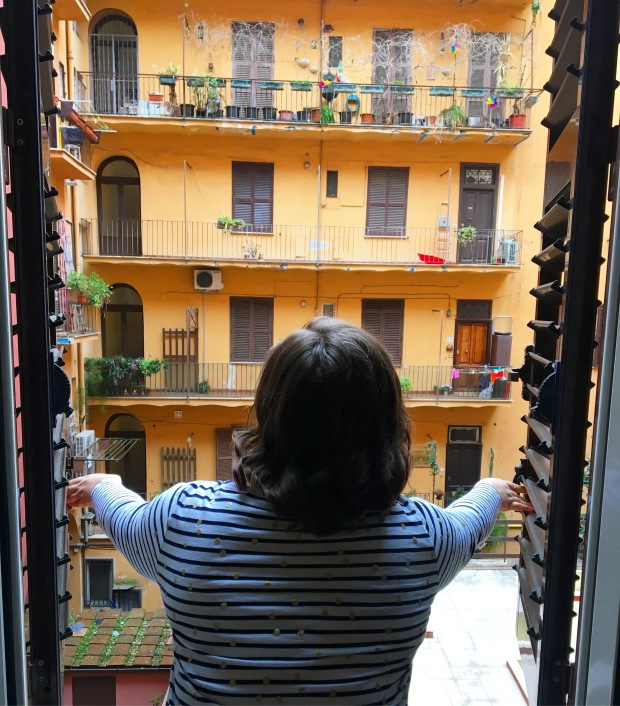 This part of the city is beautiful. Whether or not you are Catholic you can enjoy the stunning architecture, history and artwork that resides in the Vatican. Start with St. Peter’s Basilica. When you walk into this beautiful piazza you may be stunned by the vastness of the site. Plan to arrive early in the morning to avoid to lines. I was there before 10 a.m. and didn’t have to wait, but by noon the security line wrapped around the entire piazza.

This piazza fills with people on Sundays at noon waiting for Pope Francis to address the crowd. I was lucky enough to be in Rome when he was there! It was so cool to see Pop Francis pray and bless the crowd. I think he’s the reason I had such lovely weather on my trip!

The site of St. Peter’s Basilica is built at the exact site where St. Peter was crucified – upside down no less. The basilica is built on top of where he was buried, and his remains are still there today. It was also built through to process of the wealthy citizens paying for indulgences, which was an interesting bit of history I researched. There is both a rich and shocking history to this building, and to this religion in general.

After St. Peter’s Basilica, it’s time to explore the Vatican Museums. They are filled with art, and most well-known for the Sistine Chapel. Michelangelo painted every inch of every surface inside this chapel. While you cannot take pictures inside the chapel, the photos probably wouldn’t have done it justice anyway.

Make a reservation before you arrive, otherwise you may be waiting in line for hours.

While you can find beautiful monuments, piazzas and fountains all over the city, the southern portion is historic, ancient Rome. This is where you can find the Roman Forum and Palatine Hill. This offers the best view of the ancient city. Walk through the ruins which are thousands of years old and take in the history that completely surrounds you. I never get tired of seeing ancient sites. Especially in a city like Rome, I’m constantly amazed by how advanced these people were despite not having the technology we have today.

When you see fountains around the city, all of the water flowing through them is fresh from the mountains. The water still flows through the same ancient aqueducts the Romans set up years ago.

Next to the Roman Forum is the Arch on Constantine, built in the year 312 AD. And finally, one of the most iconic parts of Rome, the Colosseum. It was built in 80 AD and draws in millions of tourists every year.

You can pay to enter the Colosseum and see where these ancient, bloody battles would take place, or you can simply admire the immense size of the building by standing outside of it. I couldn’t believe how large it was! It’s hard to imagine its size until you are standing before it.

If you continue on your walk through the ancient city, you’re going to pass by the Monumento a Vittorlo Emanuele II, one of the largest monuments in all of Rome. Victor Emanuele was the first King of Italy and this was constructed in 1911 in his honor. There are museums inside the building you can visit, and it also holds the tomb of the unknown soldier. It is always guarded, a tradition we also have in the United States.

End your day in Ancient Rome by making your way over to the Pantheon. It was once a Roman Temple but is now a Catholic Church. It became famous for being the largest free standing dome in the ancient world. It was completed in 126 AD during emperor Hadrian’s rule. The building has incredible design inside, and has natural sunlight from the doorway but also from the hole in the roof.

They day I explored ancient Rome it was pouring down rain. This was actually the best way to see the Pantheon. Rain slowly fell through the hole in the ceiling, and it’s hard to describe how magnificent it was. It made me wish I was there a few days earlier to see the snow that fell for the first time in six years! 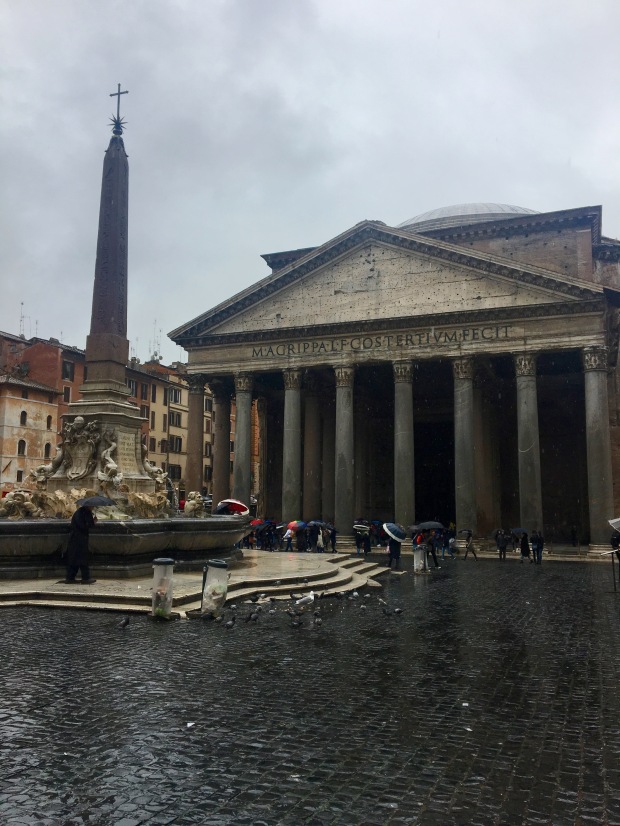 On your last day in Rome, enjoy walking around the city and admiring the seemingly endless number of beautiful fountains and monuments. The Rome metro has stops at all of these places, so you can purchase a day pass and hop on and off at all of these different sites.

Start at the Piazza del Popolo, one of the largest squares in Rome. There are churches surrounding the square and an Egyptian obelisk . I was surprised to learn that these are all over the city and were taken from Egypt during times of conquer. You can find them at the Vatican, the Pantheon, and just about every piazza in the city. (You’ll see them in a lot of my pictures!)

The next stop is the Piazza di Spagna. This is the home of the famous Spanish steps. It is home to the Spanish embassy and the steps lead up to the magnificent Trinità dei Monti church. Even though it was packed with people, this was one of my favorite spots in all of Rome!

Next stop on the metro is for the Trevi Fountain. I fell in love with this from watching the Lizzie McGuire Movie, and I was so excited to see it for myself! Just like with the Colosseum, I was taken aback by the immensity of the fountain. It was just breathtaking, and I grabbed some hazelnut gelato and took a break sitting back and watching everybody toss coins in. There are old tales that if you toss coins into the fountain you will find true love and you will return to Rome. I tossed a few in, so now it’s just time to wait and see where life takes me! 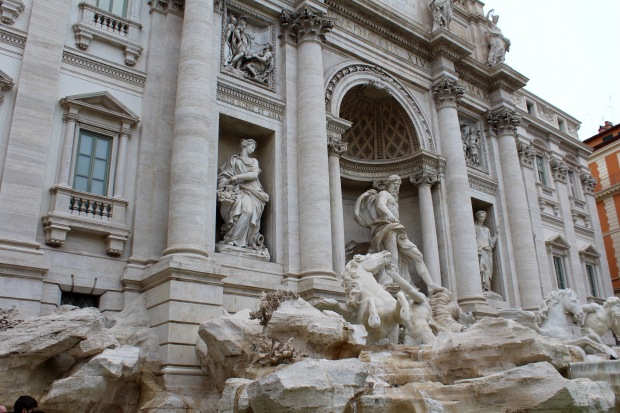 Next pop over to the Piazza Navona. This gorgeous square has a detailed church and fountain. I learned that while these were being built, the architects were in a competition to see who could build a more beautiful piece. As a joke, the creator of the fountain carved the men on the fountain looking away from the church, and the man who is facing the church has his arm raised over his face, shielding his eyes from having to look at the building.

After this there are still plenty of places you can visit. Campo de Fiori, Fonte Acqua Paola, Palazzo Montecitorio, etc. The list really goes on and on. Grab a map and go exploring!

The other option to end your last evening in Rome by enjoying a pasta class, hosted by Walks of Italy. This is definitely my recommendation, as it was easily the best part of my trip. Spend an evening drinking Prosecco, eating appetizers and making your own pasta noodles and sauce.

Rome is an enchanting city. It’s rich, extensive history adds to its charm, and the people are welcoming and excited to share their culture with you. I’m always excited to cross off another bucket-list destination, and the memories I created in Rome will stick with me for years to come!

5 thoughts on “How to Spend 3 Days in Rome, Italy”

There was an error retrieving images from Instagram. An attempt will be remade in a few minutes.