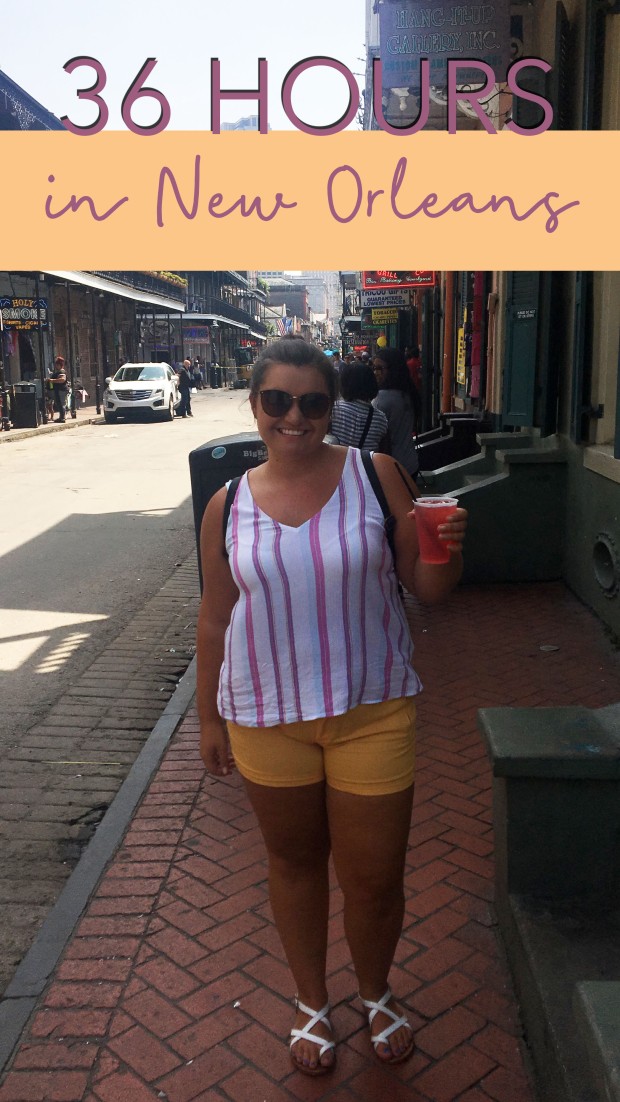 New Orleans, Louisiana, has been a bucket-list trip for me since I was a teenager. I’ve been dreaming of visiting this city, and my anticipation to go has only increased since turning 21 a few years ago. I finally made it down to the Big Easy and I learned a thing or two about history, culture, myself and why its nickname is perfect.

Here is your guide to spending 3 days in historic New Orleans.

Day 1 is a classic day. Check into your AirBNB around 3 and then hit the streets – Bourbon Street to be exact. Today is all about orienting yourself and seeing what this iconic street looks like in the day time.

Pat O’Briens
Grab a late late lunch and a drink from Pat O’Briens. This famous pub was opened in 1933 and has been thriving ever since. You can sit inside with the karaoke or dine outside on the patio. I dined outside with the gorgeous fountains and foliage. It’s a nice break from the heat in the summertime. They are known for their Hurricane’s, but don’t miss out on some of their other fun cocktails. And did I mention you get to keep the glass? 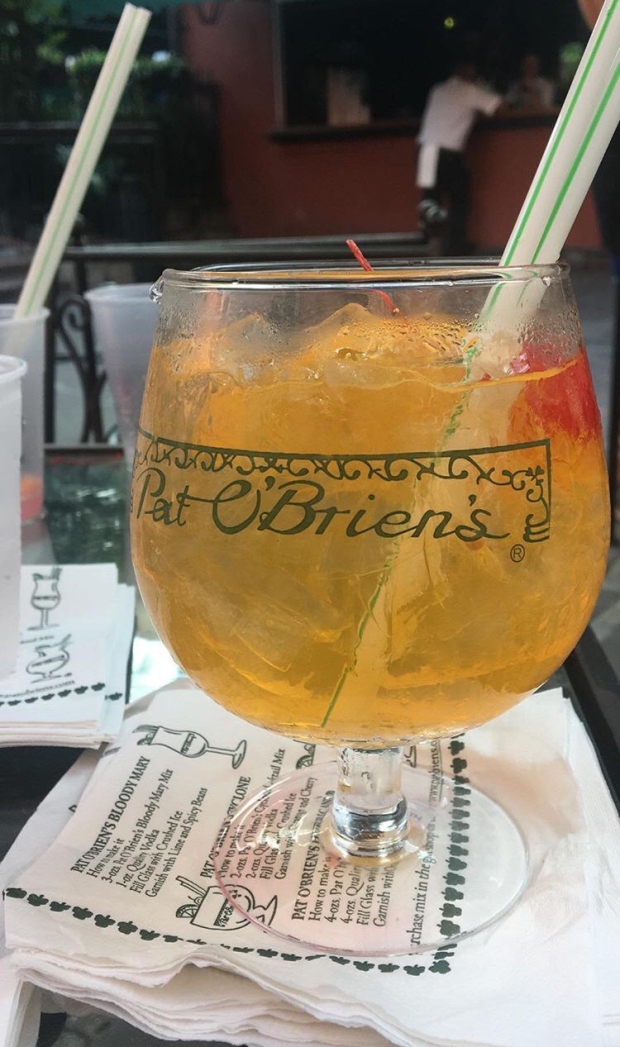 Voodoo Museum
Now that you’ve eaten you’re ready for the rest of the evening. Head over to the historic Voodoo Museum located on Dumaine Street. This is a small but jam-packed museum on the history of Voodoo culture, not only in New Orleans but in Haiti and Africa as well. It gives the history of this religion and its common practices, and it also highlights famous Queens and Doctors, like Marie Laveau. 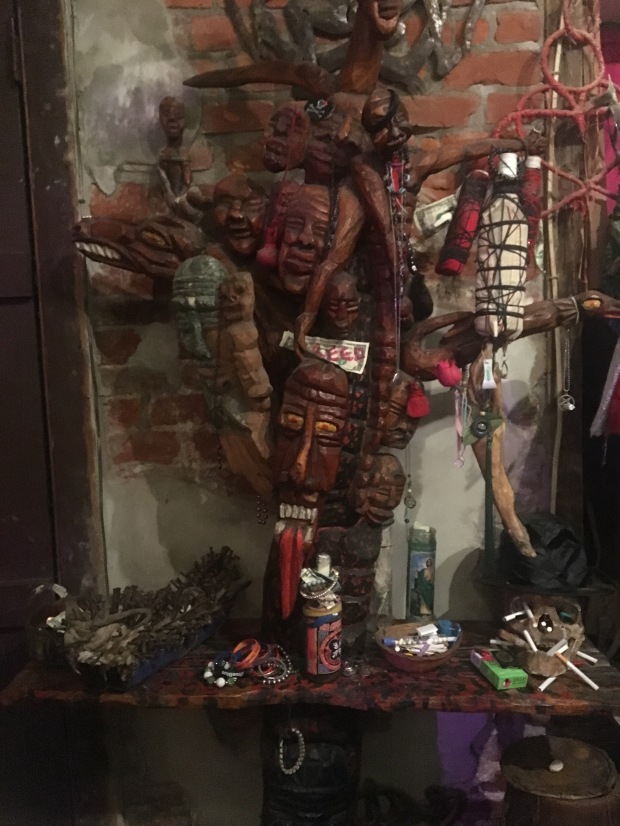 Bourbon Street
Spend the rest of the evening meandering down the classic Bourbon Street. It gets more active as the sun sets and the weather gets cooler, so you’ll be just one of many people roaming down the street. Make sure to get a souvenir Daiquiri cup that you can refill! It hits the spot during those hot summer days. You can eat dinner on Bourbon Street and see the street performers, and you can dance in some of the busiest clubs in NOLA.

DON’T MISS: The Dungeon.
Tucked away just off of Bourbon Street is an amazing bar called The Dungeon. It feels secretive and elite, and its unique atmosphere will transport you to an entirely different world. Pictures are not allowed inside, so I guess you’ll just have to go see it for yourself!

This is a long day of adventure. We are packing in the best of New Orleans in just three days, so get ready to drink lots of water, wear a hat for some shade & maybe pick up a fan in one of the shops along the French Market. 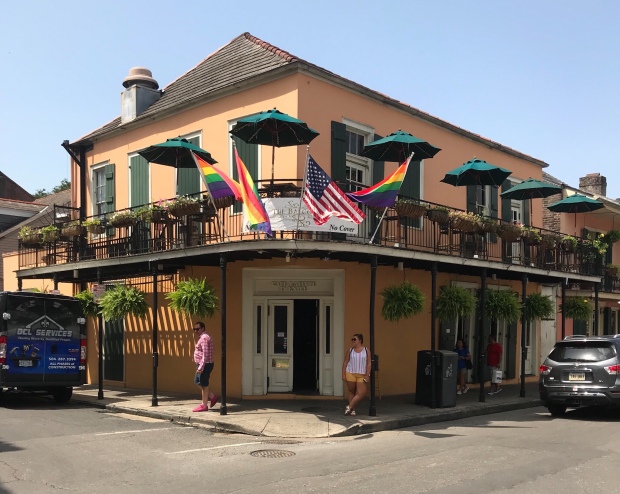 Cafe du Monde
This iconic cafe is known to just about everybody – and for good reason. With mouth-watering beignets covered in powder sugar at very affordable prices, it’s no wonder the line to get in often stretches down the block. The cafe is open 24 hours a day, so you can get up early to beat the rush, but I decided to live in New Orleans like a local. They don’t really eat breakfast, they do brunch instead. And even though there’s always a line here, it moves quickly! This cafe is too busy and bustling for people to relax and stay for very long.

Travel Tip: You can get your beignets to go! There’s a separate line around back for carry-out, so if you’ve already done the cafe experience or you don’t want to be in the crowded room, grab your treats and coffee to go and hop over to Jackson Square Park to enjoy them.

Jackson Square Park
Located in the heart of the French Quarters and named after President Andrew Jackson, this park is home to a jaw-dropping cathedral as well as some shaded benches, which can be a life saver during a Louisiana summer. There are also plenty of ghost stories from this park’s chilling past, like a preacher that has been known to pick up drunk people from the street and help them home. 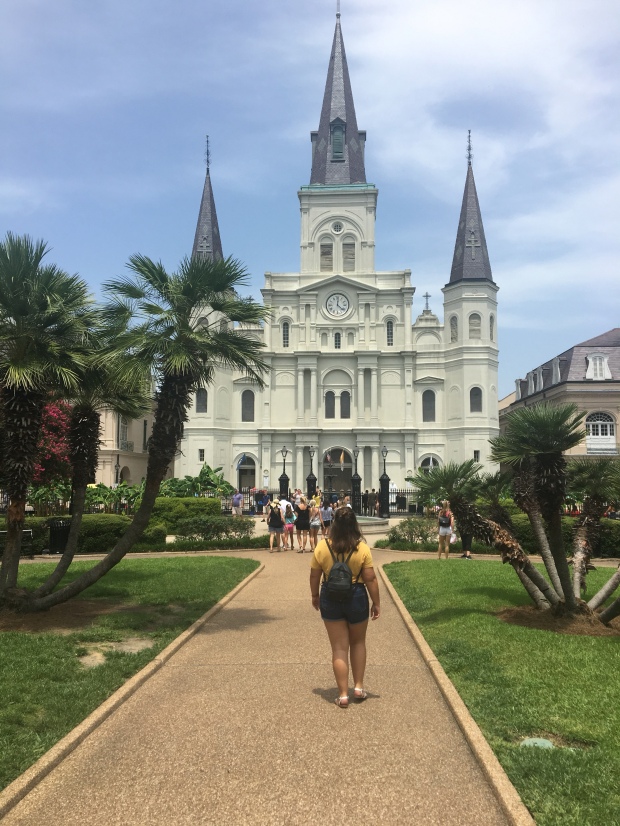 The French Market
Meander down this massive market all afternoon. You can look through souvenirs, eat food from vendors and farm stands, or grab a Grasshopper (Mint Chocolate & Vodka) and take a break in the shady park next door. This market is so beautiful and it stretches on for quite a few blocks so there are plenty of things to browse or buy.

Frenchmen Street
Known as a clean version of Bourbon Street, Frenchmen is another part of the Quarter that has bars and live music venues. It’s where the locals go for a good time and where you can find a lot of jazz music. It’s a little quieter but just as enjoyable.

Faulkner House Books
This beautiful bookshop is famous because it’s located inside of William Faulkner’s house. Take a few minutes to browse their collections of old and new books, reveling in the fact that William Faulkner once stood right where you are.

Gene’s PoBoys
While you’re in this area pop over to Gene’s for their famous PoBoy sandwiches. They were featured on the Simpsons a few years ago. Their sandwiches are delicious and its out of the way of the French Quarter so its more of a local spot rather than being jam-packed with tourists.

Read More: Where I Ate in New Orleans

Haunted Pub Crawl
End the night with one of the best things to do in New Orleans – a pub crawl! It’s the perfect place because there is a never-ending supply of bars. I decided to book a haunted pub crawl with Ghost City Tours because… why not? New Orleans is one of the most haunted places in the United States, and you can walk through the streets with your alcohol. Stop at some of the oldest bars in the U.S., Jackson Square Park, Pirate’s Alley & Marie Laveau’s house – the most famous Voodoo Queen in history. And don’t forget about The Olde Absinthe House…

Today you’re leaving the Quarter and heading over to the Garden District. It’s known for it’s Victorian-style mansions, cemeteries and being featured in American Horror Story: Coven.

Brunch
Start your day off right with some brunch. If you’re staying close to the Quarter, also stop by Molly’s at the Market for some delicious Irish Coffee. It’s a must-do for everyone visiting New Orleans. I can’t count how many people told me to stop by here, and let me tell you it was worth it.

Ride the Streetcar
For just $1.25 you can get from Canal Street to Washington Avenue. It’s a unique and cheap way to get around New Orleans, and you’ll see more of the neighborhoods in this sprawling city.

Lafayette Cemetery
You can’t go to New Orleans without seeing a cemetery. They’re famous because people are buried above ground in mausoleum-type graves because of all the flooding. This makes for an exceptionally eerie feel. You can either get a guided tour through a cemetery or walk through yourself. It just depends on how much history you’re interested in learning about. 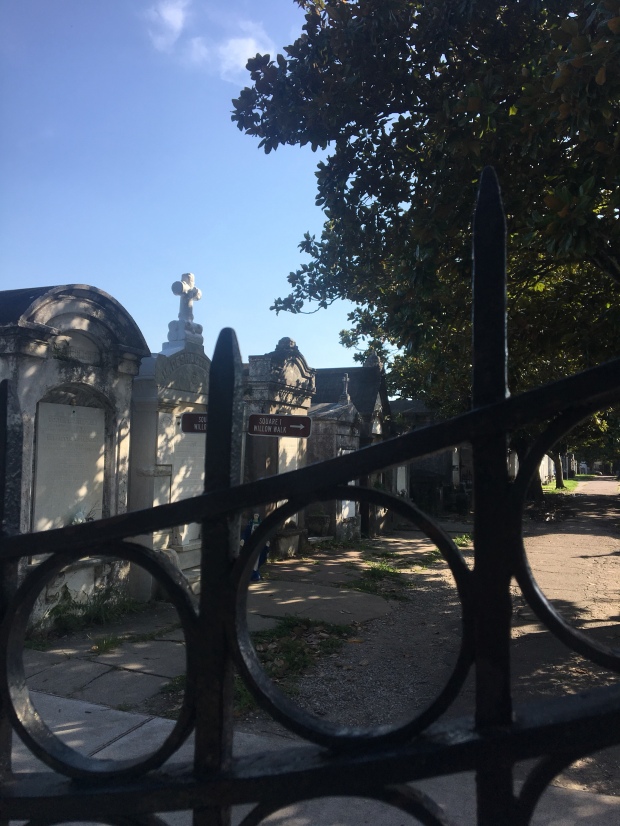 Buckner Mansion
If you’ve ever seen season 3 of American Horror Story, you’ll definitely want to stop by the home the show was filmed in! You can walk through all of the residential streets in the Garden District, but this one is just spectacular. Known as Buckner Mansion, it was built in the 1850s and is mesmerizing. It has three ballrooms inside and was simply a residential home until 1923 when it actually became an elite school.

Fun Fact: Now you can actually stay in this home for a night, or a month! It just comes at a hefty price. But, if you’ve got $20,000 lying around go right ahead and spend a month in NOLA. 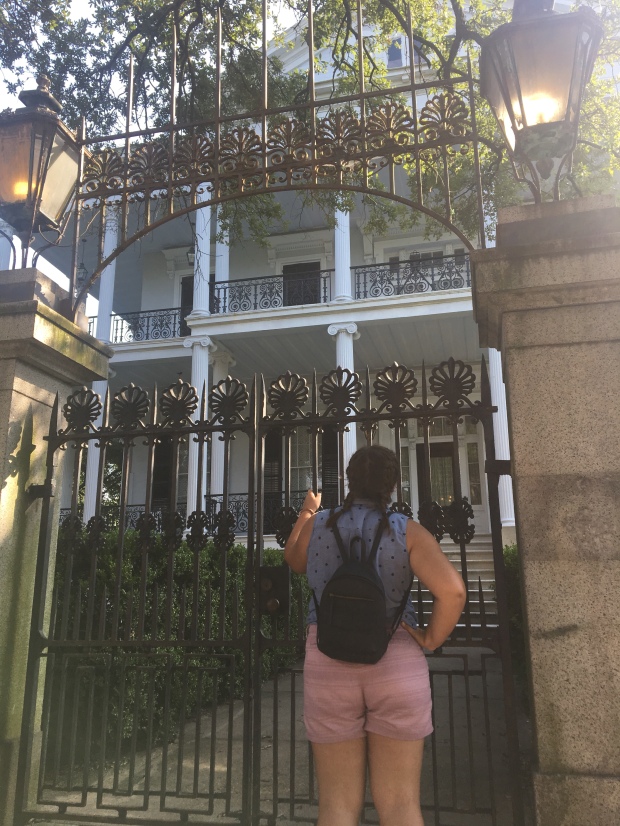 The Commander’s Palace
This is an optional recommendation. I did not eat here but it was recommended to me. This is a tourist hotspot and it’s a very formal dining experience. It’s often ranked as the best restaurant in New Orleans, and there’s even a dress code! So if you decide to eat here make sure you look the part because they will turn you away. You can’t miss this restaurant because of the bright blue paint.

Travel Tip: I ate at The Rum House instead, which was a terrific Caribbean Taqueria!

Magazine Street
There are more fun restaurants and shops here. I went into a great bookstore while I was browsing. Unfortunately because it was Sunday evening a lot of the places were closed, so plan ahead when visiting the Garden District. I don’t recommend going on a Sunday!

Find a Speak Easy
To end your trip to NOLA, go to a Speak Easy! Originating in the 1920’s during prohibition, these were secret bars people would meet at in order to drink. Do some research and ask around to find one, and just follow their instructions to get in. The quest for the password and location is all part of the fun! And if you’re really into it, dress up. Don’t just go in your street clothes.

On my next trip to the Big Easy I want to plan it around Mardi Gras. This city gets over 11 million tourists every year, and a majority of them come between December and March. There are so many festivals that it’s always a good time, but I’m excited to experience the most iconic festival the city hosts each year.

What are your favorite parts of New Orleans & what should I plan for next time? Leave a comment below!

And be careful… they say you always come back to NOLA, but after 3 visits if you’re returning it’s because you’re moving here. You just can’t help but fall in love with this city.

One thought on “36 Hours in New Orleans” 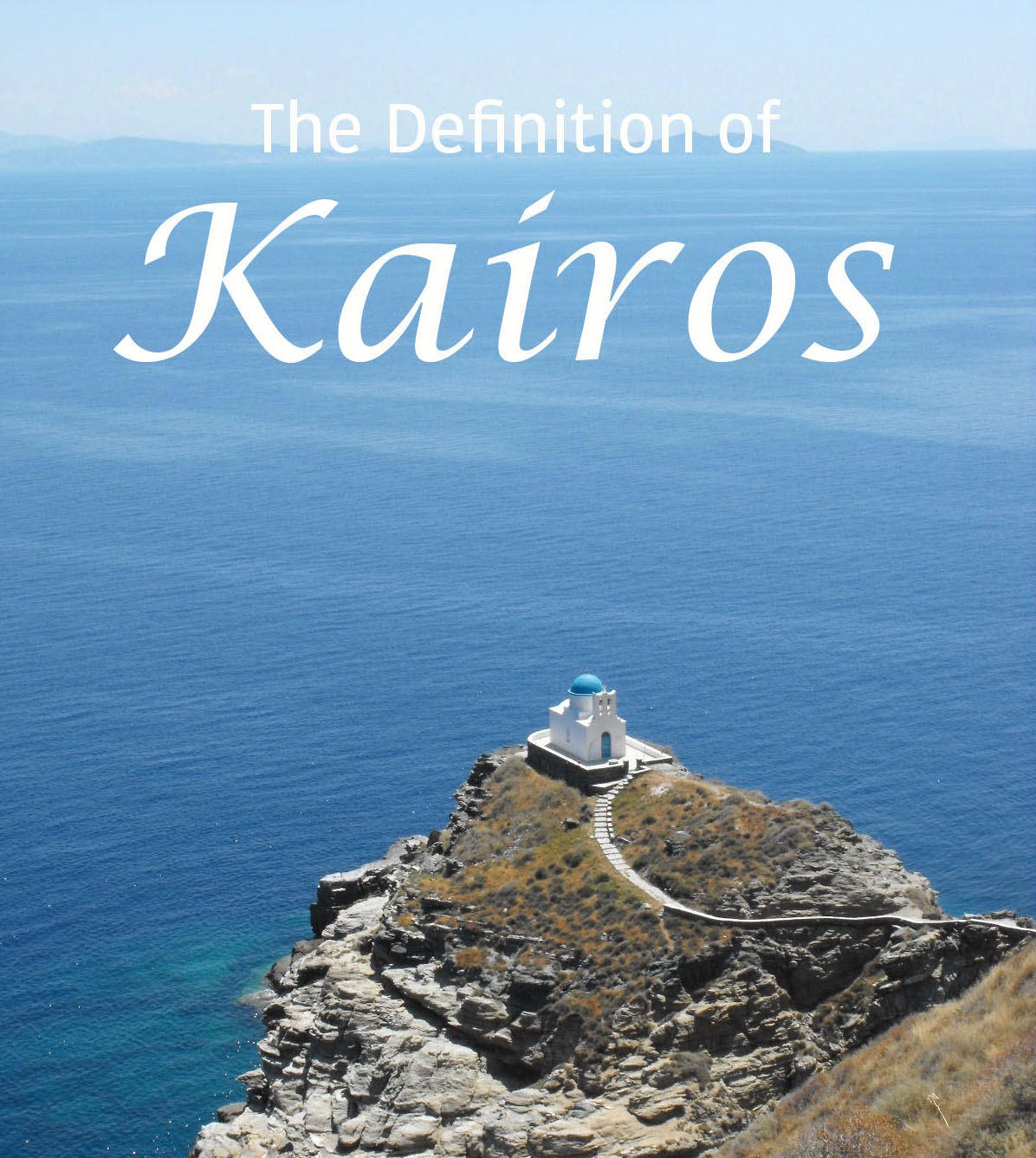